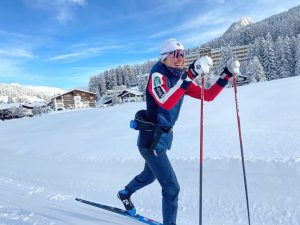 Growing up in a tiny town in Vermont, Sophie learned to ski around the same time she learned to walk.  Kind of par for the course when growing up in VT in a family with a long skiing lineage.  Like most other kids, she played and participated in other sports to mix things up but skiing was always a constant.  By 7th grade, Sophie decided to get a little more serious about the skiing endeavor, started attending Stratton Mountain School, graduated there and moved on to ski at Dartmouth and earn her degree in Psychology.  Did we mention she skis?  Besides being a 5 time All-American at Dartmouth, Sophie is now a 2 time Olympian, with 7 World Cup Podiums, and 2 World Cup wins.  Both World Cup wins put her in a very unique class:  she became only the second US woman with a win in a World Cup and she became the first US woman to win a classic World Cup event.  She is also the 3rd ranked sprinter in the world.  Not only does Sophie ski, Sophie skis fast.