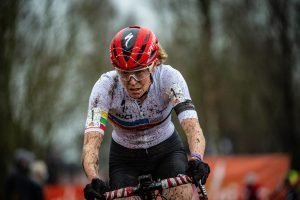 Mountain biking and Cyclocross.  On the surface seem pretty similar.  Both involve bikes, mud, and to a common observer, they might be dismissed as the same sport.  Oh how wrong they would be.  These are two completely different styles of racing, with very different skill sets and fitness needed.  Enter Maghalie Rochette.  She raced mountain bikes, took a break and got hooked on Cyclocross when a friend invited her to a race, which, after a cross season, made her realized she wanted to race mountain bikes again.  After only a year back into MTB racing, she was signed with the Luna Pro Team and has recorded 7 UCI MTB wins, won Moab Rocks 2017, and was 2nd at BC Bike Race 2017.  Oh and the Cyclocross thing? Maghalie has had 15 professional wins, 25 UCI podiums, was the Canadian National Cyclocross Champion in 2016, and 5th at the Cyclocross World Championships in 2017.  She has launched a venture, CX Fever Program, whose sole goal is to ride, race, and bring the people already in cyclocross together to help better the sport and bring more riders to it.  New, seasoned, young, old, Mags wants people on their bikes, having fun.