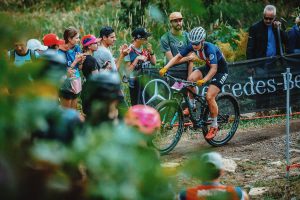 Kelsey will fully admit it sounds cliché but she remembers learning to ride a bike in her preschool parking lot, with her mother hanging on to it to help her with the balance.  Then Mom let go and Kelsey felt like she was flying. And then of course she crashed, like everyone does. As cliché as it may sound and similar to experiences many other people have had riding a bike for the first time, most of those people don’t go on to become one of the most formidable up and coming riders in the US.  She became the 2019 U23 National Champion and later in the year, charged to 7th at the Snowshoe World Cup for U23.  One of the best things about the latter?  Having a tangible moment to highlight how hard work pays off and to be able to hug her best friend and fellow racer at the end.   Kelsey will be graduating from Stanford in 2020 and will be focusing completely on racing this summer so watch out World!