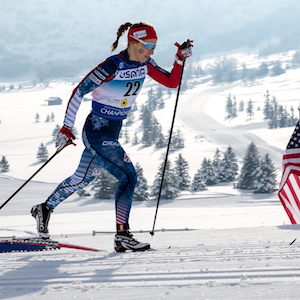 Having been born and raised in Boulder, CO, Kelsey has always maintained she is happiest when she is outside.  Whether it was playing numerous outdoor sports growing up in Boulder or attending and teaching sailing camp in Italy after living there with her family during her elementary school years, odds are you weren't going to find Kelsey inside unless she was at school.  So, after graduating Middlebury College with a degree in Neuroscience, Kelsey decided to pursue her long time dream of becoming a World Cup level Nordic racer.   Having already represented the US Ski Team in the U23 World Championships in 2016 & 2017, she joined the SMS T2 Team and competed in her first World Cup in the 2018 season, earning a top 40 finish.  With multiple domestic Supertour podiums and OPA and Scando Cup Top Tens, she seems well on her way to her dream of making the World Championship or Olympic US teams.  And, you know, if she ever decides to hang up her skis competitively, she'll always have that Neuroscience thing to fall back on.