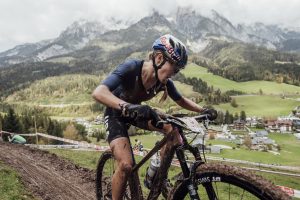 Kate is a firm believer sparkles make you go faster.  If this is the case, Kate must live in a sparkle factory.  Okay, she doesn't but she does happen to live in the birthplace of mountain biking.  And, as one would expect, started riding at a young age.  However, mountain bike racing started as a way to compliment her cross country running.  But, after her first mountain bike race, legend has it Kate had so much fun, she vowed she would never run again.  Right there with ya.  Just goes to show, it doesn't matter how you figure out what you love and want to do, it only matters that you do.  And did Kate ever.  So far, she has been the US Elite XC National Champion in 2017, the U23 UCI MTB World Cup Overall Winner in 2017, was 2nd at the U23 UCI MTB World Championships in 2017, is a 5-time U23 UCI MTB World Cup Winner, and a 10-time U23, Junior and Collegiate National Champion. During her free time (huh?), she attended and, in 2017, graduated from Stanford University with a degree in Human Biology. With college finished, Kate turned her focus solely to her career as a professional cyclist for the 2018 season.  In 2018, Kate became the first American woman in 16 years to win the UCI Elite World Championships.  Well, sparkles compliment rainbows very nicely.