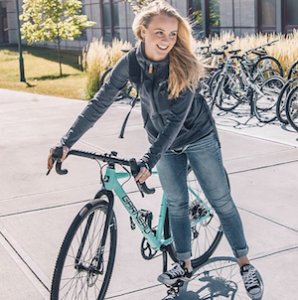 Hazel grew up in Morrisville, Vermont and has been mountain biking since she was little. She started racing in high school at Proctor Academy in Andover, NH, but her main focus was ice hockey which led her to initially commit to playing for a college in Massachusetts. After quickly realizing she no longer wanted to pursue a collegiate hockey career, she transferred home to the University of Vermont and has been a mentor at the Vermont programs since the summer of 2016 following her freshman year. Three years of mentoring Little Bellas and an undergraduate degree later, she has taken on the role of Marketing Coordinator which she absolutely adores. Hazel is currently living in Vancouver, British Columbia where she attends grad school and rides her bike as much as possible.

Where do you call home?  Right now, Vancouver, British Columbia. But home will always be Vermont.

If you had a super power, what would it be?  Teleportation, the ability to be wherever I wanted in the world at a moments notice would be incredible.

Favorite food?  If I could eat one thing for the rest of my life it would be salmon. Or dumplings. Or fish tacos. Or coffee.

Hidden talents?   If I told you they wouldn't be hidden anymore...

What is your favorite Little Bellas experience?  My first camp ever was the first overnight at Hosmer Point, and it was two weeks of nonstop riding for the four girls in the program. I remember one of the last nights the girls were competing in a lip-sync competition, and while they were dancing, you could see all these new leg muscles, and could quite literally see how much stronger they were after that camp. It was crazy!

What is a fun fact that people don't know?  My middle name is a fruit, I once lived on a boat for a few months when I was 16.