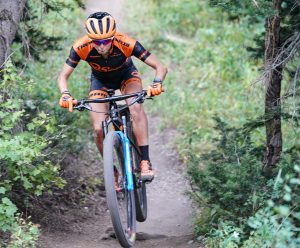 Adventure junkie.  This is a phrase Hannah uses to describe herself.  She also makes the claim she "probably"has the perfect makings of a type A personality.  Let's examine the evidence.  Hannah is a 4-time Collegiate MTB National champion, was the 2017 Collegiate Cyclocross National Champion, is a 2-time XTERRA Triathlon Overall Amateur World Champion, and has finished 2nd three times at the U23 MTB National Championship National Championship.  On the athletic side, the tally would be, world or national champion in three different sports, one of which has three sports within itself.  Alright, now let's look at another piece of the equation.  Hannah recently graduated from college, having double majored and received two degrees, one in Athletic Training and the other in Exercise Science. She is also a USA Cycling Certified Coach, Certified Athletic Trainer, and Cycling Coach Columnist at Mountain Bike Tales Online Magazine. Given the timeline of Hannah's life, many of these athletic and academic milestones happened in and around the same time.  There's still only 24 hours in a day, right?  Okay, just checking.  Conclusion: type A?  Maybe.  Going out, working hard, and having fun doing what you love?  Most definitely.