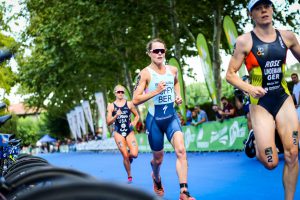 It's kind of ironic when asked what her hometown was, Flora answered with three answers.  Those three answers?  Bermuda, Boulder, and Stellenbosch, South Africa.  Why is it ironic?  Because Flora is a triathlete.  Just a run-of-the-mill, swim-bike-run athlete, going about her day.  Ha ha ha, deep breath.  Flora is a 3 time Olympian, 4 time XTerra World champion, 2 time ITU Cross Triathlon Champion, 2 time ITU World Triathlon Series Champion, and has a gold medal from the 2018 Commonwealth Games, becoming Bermuda's first female Commonwealth gold medalist. She also made history by becoming the first woman to win a World Series race after being the fastest in all three disciplines of swim, bike and run at a series race in one of her hometowns of Bermuda.  Unfortunately, she had to withdraw from a couple races in the 2018 season due to injury, causing her to miss out on a chance to win a hat-trick three straight ITU World Championships.  As hard as it was, she listened to her body and took the time to heal and recover.  And smart athletes come back stronger.  She now has eyes on the 2020 Tokyo Olympics.  Not bad for a girl from Bermuda who jumped into her first triathlon at age 7 and decided it was something she loved and wanted to pursue.