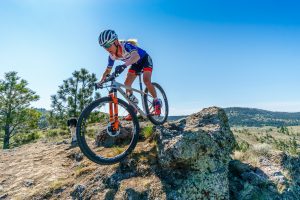 Catharine is all about riding.  One could say all kinds of riding as she did ride horses in her youth but right now, we're talking bike riding.  She herself is, well, a pretty good rider and we'll get to that in a second.  Right now, let's talk about her devotion to the cycling community and getting people, especially kids, on bikes.  Catharine lives in Kamloops BC, is the President of the Kamloops Bike Riders Association, and has helped parents in the area organize and host the first Kamloops Kids Mtn Bike race league. On top of this, there is also Pendrel Racing, a cross-country MTB development team formed by she and her husband to assist the next generation of riders.  And remember the mention of Catherine being a "pretty good" rider herself?  She has been a 3-time Olympian, winning the bronze medal at the 2016 Olympic games, a 2-time World Champion, and has over 40 World Cup podium finishes.  And she's not done yet, in either area.  She still has a lot more riding ahead of her and being a Little Bellas Pro Ambassador helps assure she will continue to influence young, upcoming ridings.  Dedication.  Dedication to a sport she truly loves and cares about.