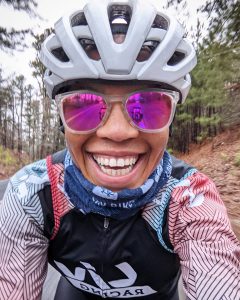 Ayesha is stubborn. Or as people eloquently put it, she has tremendous mental toughness. But Ayesha knows it and accepts it, she’s stubborn.  And it’s what got her to where she is today, a professional road cyclist traveling the world, being a face of inspiration, and an advocate for people of all ages and races to take up the sport of cycling.  It hasn’t been easy. Starting as a commuter cyclist in college and deciding, hey, I want to become a pro cyclist. Riding through the busy streets of Atlanta, to visit her grandmother who lived 80 miles (plus an extra 20 to get the century) away as a way to train, even though her grandma worried and thought it was too dangerous.  Grandma couldn’t really say much though. Ayesha credits her “mental toughness” to her. From those busy streets to streets all over the US, she rode and raced, many times as an independent rider, finishing top 10 in UCI sanctioned races and never giving up on her goal. It paid off. Ayesha was offered and accepted a spot as a member of Liv Cycling’s race team.  Represent Ayesha, represent.