This guest post by professional writer, Taneika Duhaney, mother to Little Bella, Elizabeth, and 2022 Rooted racer, expertly captures what it means to mentor on mountain bikes. Mentors are everything to Little Bellas, keep reading...

In 2020, like many people in my area, I was tired of being sequestered inside my home. I wanted and needed to get out, but I didn't know what I would do. An old cycling friend called and invited me on a no-drop ride in April. I had not ridden my bike in almost three years due to Myasthenia Gravis. Myasthenia Gravis caused muscle weakness in my eyes, neck, and arms. Since my diagnosis, I have learned to manage and live with my diagnosis but have not ventured into any significant endurance activity. The prospect of riding 30 miles with anyone was not especially appealing, but I accepted the invite nonetheless.

That weekend reminded me why I enjoyed cycling and what I was missing.

Getting a girl on a bike 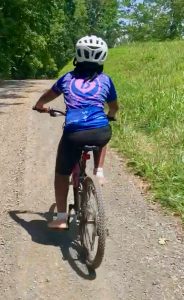 Since then, I have ridden my bike more often than not. Within a few months, I shifted from road cycling to gravel cycling. I enjoyed riding off-road and wanted to introduce my then seven-year-old daughter, Elizabeth, to off-road riding. As I learned more about off-road cycling, I gushed about how hard it was but also how much fun I was having. So much that I wanted to bring my daughter along for the ride.

In November 2021, while interviewing for a scholarship, the interviewer suggested I look into Little Bellas for Elizabeth. At the end of our conversation, I searched for the closest Little Bellas chapter. Surprisingly, there was only one chapter close to me. By close, I mean almost 90 minutes away. Would my daughter like mountain biking? Would the kids and mentors be welcoming? These questions and many more percolated in my mind.

Between gravel rides and races, I found a semi-competitive youth cycling team that was a stone's throw from my house. They offered mountain biking and road cycling. The best of both worlds, I thought – or so I hoped. My daughter beamed at the chance to ride bikes with kids rather than just mom. On the first day – and for most sessions – she was the youngest, the only girl, and the only person of color. Despite these factors, Elizabeth only cared about riding her bike. After each practice, I asked about her ride. Almost on cue, she would reply "I want to ride again!" The Little Bellas program was scheduled to begin in a few weeks, so this was an encouraging start.

Every Monday and Wednesday, Elizabeth would rush home, pack her water bottle, and grab her helmet to practice with the kids’ group near our home. Her enthusiasm continued to grow, even though she was still the only girl and the age and number of boys grew week after week. She enjoyed riding...until the fifth or sixth practice.

That evening Elizabeth raved about learning how to ride across a stream, hover over her seat, and some other skills. I reminded her about the upcoming Little Bellas session, and her excitement was palpable. Later that evening I received an email from the mountain and road biking organizer and coach. In summary, Elizabeth is catching on nicely, and he appreciates her enthusiasm. However, with a limited volunteer depth and Elizabeth being the slowest rider, he recommended that she no longer attend their practices. He suggested a non-competitive group for smaller kids.

The next day I struggled to break the news to Elizabeth. When I did, she cried. As I consoled her, she asked one question, "Why?" I explained the rationale as delicately as I could. Unfortunately, rejection is never easy, regardless of rhyme or reason.

"What if the Little Bellas won't want to ride with me?"

We made the harrowing trek to her first Little Bellas session a few days later. "What if they won't want to ride with me like the kids in the other group?" she asked. I encouraged her to go with an open mind. As I waited impatiently in the parking lot for her to return, I worried if she would be accepted, encouraged, or rejected.

My concerns were put to rest when I saw her riding into the parking lot with her Little Bellas group with the biggest grin. As we prepared to leave and for most of the drive home, she gave me a play-by-play of where her group rode, what she saw, and who she befriended. "Why is Little Bellas only on Sundays?" she moaned.

Her love for mountain biking blossomed with each session. When the Little Bellas program finished, Elizabeth was understandably disappointed. She wanted to ride more – she asked almost every day. Sometimes we would ride gravel, but she preferred mountain biking. 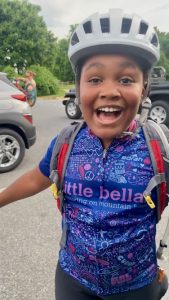 At the end of July, as I prepared to drive to Vermont for Rooted Vermont – a gravel race in Richmond, Vermont, featuring some of the most challenging gravel roads flanked by pristine views, Elizabeth insisted on wearing her Little Bellas jersey on our ride. As we rode up the final climb, she struggled and stopped. We paused, mid climb and I reminded her “you can do hard things, my girl.” She wiped her tears, I balanced her bike and she rode to the top of the hill. Excited that the climb was over she smiled and yelled “this is how you hover!”

The day before Rooted I made it a point to ride the final half mile – an undulating single-track section of dirt, roots and rocks with a steep descent. As I made my way down the slope, I hovered over my seat, just as Elizabeth did on our last ride.

The next morning, gravel racers of all levels lined up for the Rooted course. Standing on the front line with my Velocio Exploro teammates, we each had our personal goals. Mine was to attack the descents.

I executed my race strategy as planned and fueled well. With less than seven miles to the finish line, I remember feeling strong. As a rider passed me, I thought, "get on that wheel" and I did. Whoever I was riding behind was drilling the pace. A quick glance at my Wahoo, and I wondered why I was rolling at 22 mph. "You got this," I think I heard the rider in front of me say. "Uh-huh," I gasped. With less than a mile to go, my back could not hold on so I let the wheel go. "What just happened?" I thought as I smiled astonished at what just happened.

...and ends up matching pace with a 2x Olympic mt biker

I rode the final stretch of pavement and made a left turn for the single track finale. Riding through a cloud of soap suds then navigating the single track gave me chills and an overwhelming sense of accomplishment. After greeting my teammates I saw the person who I was chasing during the final stretch. She approached me and I immediately noticed the Little Bellas logo on her cycling kit. Giddy with joy and muttering what could only be construed as gibberish, I thanked her for the pull. She complimented me on hanging in there. Never have I ever been so happy to get dropped. As I calmed down and embraced the events of the day, I had an epiphany: I rode with Lea Davison! Yes, that Lea Davison – two-time Olympian, professional cross-country mountain biker, and co-founder of Little Bellas. I couldn't wait to tell Elizabeth. Little Bellas mentors taught her how to ride and Lea Davison helped me in a race.